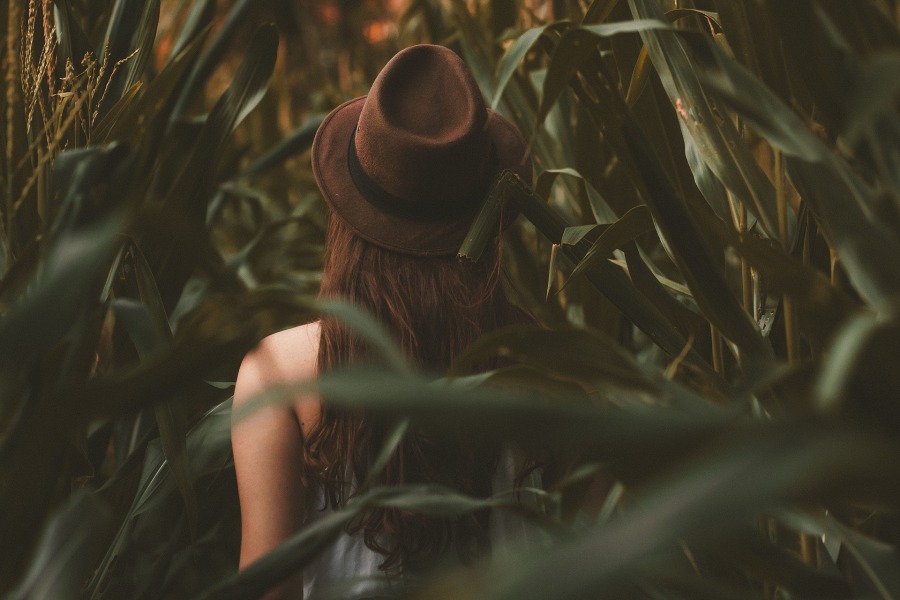 The piercing scream reverberated in my head. I could see a young woman. Her wild dark hair hung across her shoulders in sweaty strands. She was attached to something. I could not quite make it out what it was, but it looked like a wooden cross. No, no, that wasn’t right. It was a post, and she the scarecrow, resided in the middle of a cornfield.

“What was she doing there?” I thought.

Then I noticed the blood. Lots and lots of dark crimson. There was blood mixed with dirt caked on her face and body. There was blood on her hands, her legs… and wait, her clothing was ripped. There were slashes down her dress. What was once a light flowy white dress had become a distressing frock. The rips in her dress gave a glimpse of her bare skin, a pale white. I could see several fresh stab wounds. Drops of scarlet gently seeping out. I noticed that one bra strap was sliced, which exposed her breast and barely covered her nipple. She grimaced, looked away, and cried. She felt violated that the top of her areola was visible for this heathen who had taken her when no one else had been given the right to see it. She was scared and disgusted at what else this man might do to her.

“What the heck was going on? Who is she?!” I mouthed to myself.

Then a figure slowly sauntered into my peripheral vision. A dark shadow among the golden flames of a campfire. The wood cackled at the disgraced being. A banshee’s vindictive laugh. The woman let out a piercing scream once again. Her body shook violently as she howled. She tried so hard to escape her new prison by writhing like a viper up and down the post. Nothing succeeded. The figure came up to her, inches from her face. She winced at the acrid smell of his breath. Tobacco, maybe? I then had noticed a shiny object in the figure’s hand. It gleamed and reflected the red and orange dancing hues of the fire. The woman whimpered. A stream of tears flowed from her face.

The figure held up this shiny object. It was a small blade, maybe a pocket knife. He forcefully drove the blade into her stomach. As the figure did so, the woman cowered over as much as she could and let out a yelp. Fresh blood streamed out from her new wound. There was a bulge protruding from his nether region. I recoiled at the sight.

I wondered how much more her body could take. How much more could her mind take? At what point do you just drop your survival instincts and let death take over welcoming it. But then, then I thought to myself, “Why the hell am I even seeing this?!“

The figure’s hand turned toward me. It reached out to me with its long tendril fingers. I stepped back in fear and quivered. Suddenly I felt my body shake and I jerked opened my eyes. I had been sleeping. If that was a dream, I wanted a redo. That was just sick.

“Evan, honey, are you okay?” my mother asked with concern.

“What? Who? Why? Um, why do you ask?” I replied. Then I realized I felt damp, Almost sticky, with the taste of bile in my mouth.

“You’re sweating profusely. Are you feeling well?” my mother questioned.

I am not sure what happened. I have never experienced a dream like this. A dream that seemed so real that I was so much a part of, a movie-goer in a new AI film. Who dreams of a woman who is being held captive, continuously injured, and most likely killed?! And the crazed figure was getting a hard-on from it?! Okay, maybe Ted Bundy, but me?! Just sick, sick and disgusting. I’m just a kid. Just a teenage boy. What the hell?!

I gulped to remove the bile from my mouth, winced as it went down my throat, and responded, “I’m fine mom. Just a bad dream.”

I noticed that my mother’s face looked leery, a tad unsure that what I had just said was true, that I really felt fine. My father glanced at me through the rear view mirror for a second. He was appeased with my response. Mom still wasn’t buying it.

“Come on Charlotte,” my father said, “we need to get back on the road.”