Small town America. A town of roughly 18,500 people. There is a nice downtown with quaint shops, a true homey feeling.

And yet, there is something that divides this town.

For years, decades even, the town has displayed a nativity scene during the holidays on P.T. Barnum Square, a triangle piece of land right smack in the middle of the charming downtown. It is where almost all the town events occur. It houses pizza joints, our special ice cream shop and a bridal store among others. I am constantly over there since my gym is right across the street.

The nativity has been an icon to the downtown area, and now, now it is the source of the resident split. This year there is a new nativity:

I am not going to lie, it is beautiful. Funded by a GoFundMe and several residents, it sits right in front of the Christmas tree. Although breathtaking, it is huge. I mean big, bordering on massive. I think it is because of this reason that certain residents became not irate, but annoyed that other holidays weren’t being represented while the nativity just grew bigger. One resident, an Atheist, decided to submit an application to display a banner on P.T. Barnum Square: 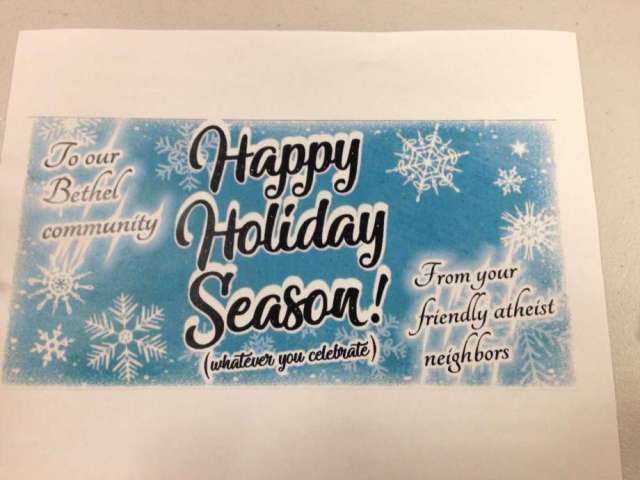 Well, this caused quite an uproar on the local Facebook pages and within the town itself. This is where true colors showed. This was when I realized we are a town that is divided. There is only love if, if you are a Christian, according to many residents.

A good number of residents didn’t understand why the Atheists would want to put anything on the Square… after-all, they do not celebrate anything. A few told the anonymous Atheist banner submitter to move out of Bethel, that they do not belong there. With all the recent antisemitic news, I, a Jew, began to feel uncomfortable in my own town. People were becoming just downright cruel.

But where this is dark, there is light, right?! Some of us religious minorities spoke up. Inclusion! If you can have a creche on a public, town-owned, piece of property, why not have other things?!

We discussed a possible Menorah (Hanukkah candle holder) and a Kinara (Kwanzaa candle holder). Those of us that wanted inclusion were renewed with honor and strength in the possibility of displaying our faiths, of increasing the knowledge of them to the majority of the town residents who are Christian.

But, the town realized that with all this, they needed a rule. In the first meeting held for the Atheist banner, the room was divided. Majority felt it wasn’t needed, that it was a way for the Atheists to call out themselves (because a nativity on the green doesn’t scream Christianity?!). They thought it ruined the holiday spirit of Bethel, ruined the Christmas feeling of Bethel. Back and forth, back and forth… the good news was that after this first meeting, many people understood the Atheist resident’s desire in the banner, the need to include every member of this town regardless of religious belief. By the second meeting, the banner was approved. A committee has now been formed to look at the long term guidelines to displaying things on the Square.  It has been about 2 weeks since the approval and the only thing on P.T. Barnum Square is the creche & lit Christmas tree. Where is the banner?

I had mixed feelings on all of this. I am Jewish by birth. I am not religious by any means but I take pride in my religion/ethnicity. I light the Menorah every year. I make challah and will bake Hamentaschen for Purim. I love my given Hebrew name (Shalva Maera). I also married a Catholic. He is not religious either which is good because there were no arguments when our daughter was born of which religion to raise her. I have respect for all religions and their practices. I am a very fair and just person. So where did I stand?

I think the nativity is beautiful. It is a great symbol for those that are Christian and deserves to be displayed. But where to display it? The town owns the Square. By displaying a religious symbol on something that is town owned, is this not overstepping the separation between church and state? If the town committee starts allowing all religions to display things during the holiday, what happens when we run out of room on the Square? Are the nativity and banner grandfathered in at their size and everyone else’s displays become smaller?

Ultimately, I am with a minority group of residents concerning a certain solution. Because the land is town owned and because it is not a big piece of land to start displaying everyone’s holiday, I believe it should just be left empty. Leave the walkways and benches. Leave the foliage and landscaping. Leave it to its natural beauty. Move the nativity to one of the many churches.

If you can’t include everyone, then include no one.